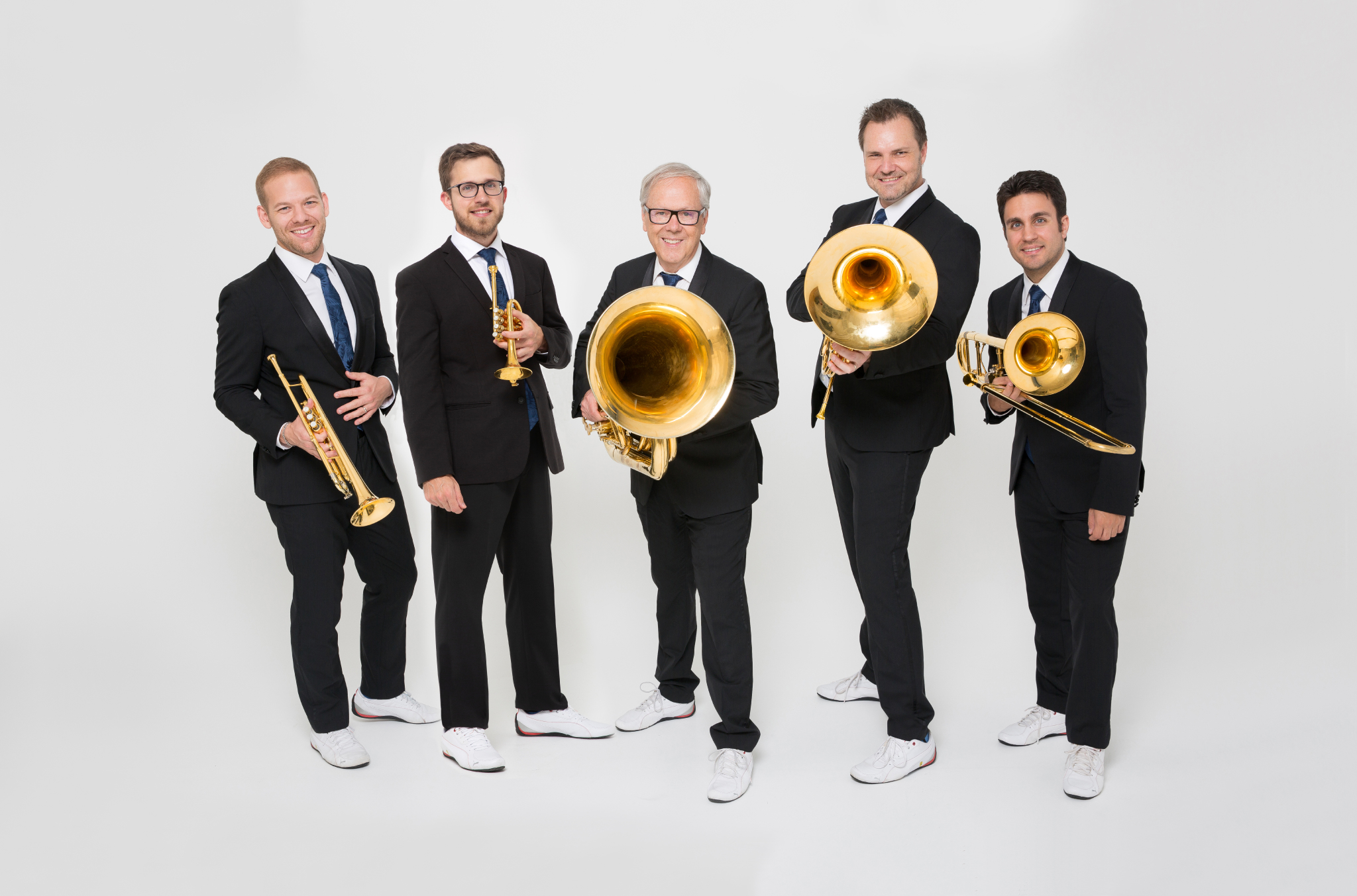 With an international reputation as one of the most popular brass ensembles today, Canadian Brass has truly earned the distinction of “the world’s most famous brass group.” Masters of concert presentations, Canadian Brass has developed a uniquely engaging stage presence and rapport with audiences. Each of their concerts will show the full range from trademark Baroque and Dixieland tunes to new compositions and arrangements created especially for them – from formal classical presentation to music served up with lively dialogue and theatrical effects. The hallmark of any Canadian Brass performance is entertainment, spontaneity, virtuosity and, most of all, fun – but never at the expense of the music: Whatever the style, the music is central and performed with utmost dedication, skill and excellence.

Following the concert, the recording will be available to view for a period of 7 days at theviolinchannel.com and the App Summer YouTube channel.

Friends Chuck Daellenbach and Gene Watts first came together in 1970 to form a brass quintet — a chamber music setting not entirely new, but never before having garnered the success and storied career Canadian Brass would achieve over the next 40 years. Initially, Gene took on the role of developing new repertoire while Chuck was the moving force in marketing, publishing and managing the business. Three empty chairs were quickly filled and together, the group’s imagination and consummate musicianship elevated the art of the brass quintet to what it is today. Here was not only an opportunity to explore the possibilities of an all-brass chamber group but a challenge to bring the sound and the excitement of brass music to new audiences.

Masters of concert presentations, Canadian Brass has developed a uniquely engaging stage presence and rapport with audiences. Each of their concerts will show the full range from trademark Baroque and Dixieland tunes to new compositions and arrangements created especially for them – from formal classical presentation to music served up with lively dialogue and theatrical effects. The hallmark of any Canadian Brass performance is entertainment, spontaneity, virtuosity and, most of all, fun – but never at the expense of the music: Whatever the style, the music is central and performed with utmost dedication, skill and excellence.

With a discography of over 130 albums and an extensive world-wide touring schedule, Canadian Brass is an important pioneer in bringing brass music to mass audiences everywhere. They have sold well over two million albums worldwide, with 1.2 million sold in the Nielsen Soundscan era alone (since 1991). They continue to score Billboard chart positions — like with their rousing recording of patriotic songs and marches, Stars & Stripes: Canadian Brass Salute America, which spent eight weeks in the Top 25 on the Billboard Classical Chart, peaking at #2! Touring legends with an enthusiastic fan base, the Canadian Brass play to packed houses everywhere throughout the USA, Canada, Japan and Europe. They have also toured Australia, the Middle East, the Soviet Union and South America. They were the first brass ensemble from the West to perform in the People’s Republic of China (where they returned for a five-city tour to great acclaim in the spring of 2010 and several visits after this, including an appearance on Hunan TV for Chinese New Year), as well as the first brass group to take the main stage at the venerable Carnegie Hall. On numerous occasions Canadian Brass has been invited by the Canadian Government to play for visiting heads of states, becoming one of Canada’s greatest resources and musical ambassadors.

Millions of television viewers have had Canadian Brass in their homes with appearances on The Tonight Show, Today and Entertainment Tonight, and recently to more than half a billion viewers for Chinese New Year on China’s most popular station. They have appeared as guest artists on Evening at Pops with John Williams and the Boston Pops, Beverly Sills’ Music Around the World, numerous PBS specials, including a celebrated appearance on Sesame Street, and are frequent guests of many major symphony orchestras. Canadian Brass were the featured artists on the soundtrack to the 1988 film The Couch Trip, starring Dan Aykroyd and Walter Matthau. Consummate artists, the quintet has also created unique and interactive videos that have gained an international audience, including a series of DVDs featuring the brass in concert and teaching. They are on the cutting edge of technology, offering their fans multimedia airplay, downloads and YouTube videos and streaming opportunities, as well as digital applications with iPhone and other smartphone carriers. You can find them twittering and on Facebook with their fanbase growing daily!

The varied Canadian Brass repertoire features brass standards as well as a wide-ranging library of original arrangements. These include the works of Renaissance and Baroque masters, classical works, marches, holiday favorites, ragtime, Dixieland, Latin, jazz, big band, Broadway and Christian music, as well as popular songs and standards. Having started with a very limited base, Canadian Brass has created their own musical world by transcribing, arranging and commissioning more than 600 works, including critically acclaimed compositions from Michael Kamen, Luther Henderson, Bramwell Tovey, Don Gillis and more. They have transformed a previously neglected group of instruments with a limited repertoire into a versatile and vital ensemble that can play everything from Gabrieli to Gershwin! Canadian Brass is especially noted for their famous Holiday Concerts at Christmastime and was at the forefront of re-establishing Scott Joplin with today’s audiences through their research, arrangements and recordings of his “rags” and other works.

Education plays a key role in the story of Canadian Brass, and each member is uniquely attuned to training the next generation of players. On their travels around the world, they often pause for masterclasses and are more than happy to work with students and young audiences. Canadian Brass is currently Ensemble in Residence at the University of Toronto after having been Chamber Quintet-in-Residence for many years at the Music Academy of the West in Santa Barbara, California, and has created an innovative brass summer course at the Eastman School of Music. Their support of education is also clearly viewed in their outreach and interaction with El Sistema, the acclaimed global music education program in Venezuela.

In conjunction with the Hal Leonard Corporation, the Canadian Brass have made available their extensive library of brass music for performers of all levels as well as learning tools. Since 1998 Canadian Brass has been a recording artist at Opening Day Entertainment Group (ODEG) (distributed by IDLA) releasing over 25 CDs on the imprint to date. Opening Day is owned and run by Chuck Daellenbach together with his wife, MB. Canadian Brass sheet music and recordings are available in their online store.

With four decades under their belts, Canadian Brass continues to thrill audiences around the world — and they don’t look like they are letting up anytime soon! 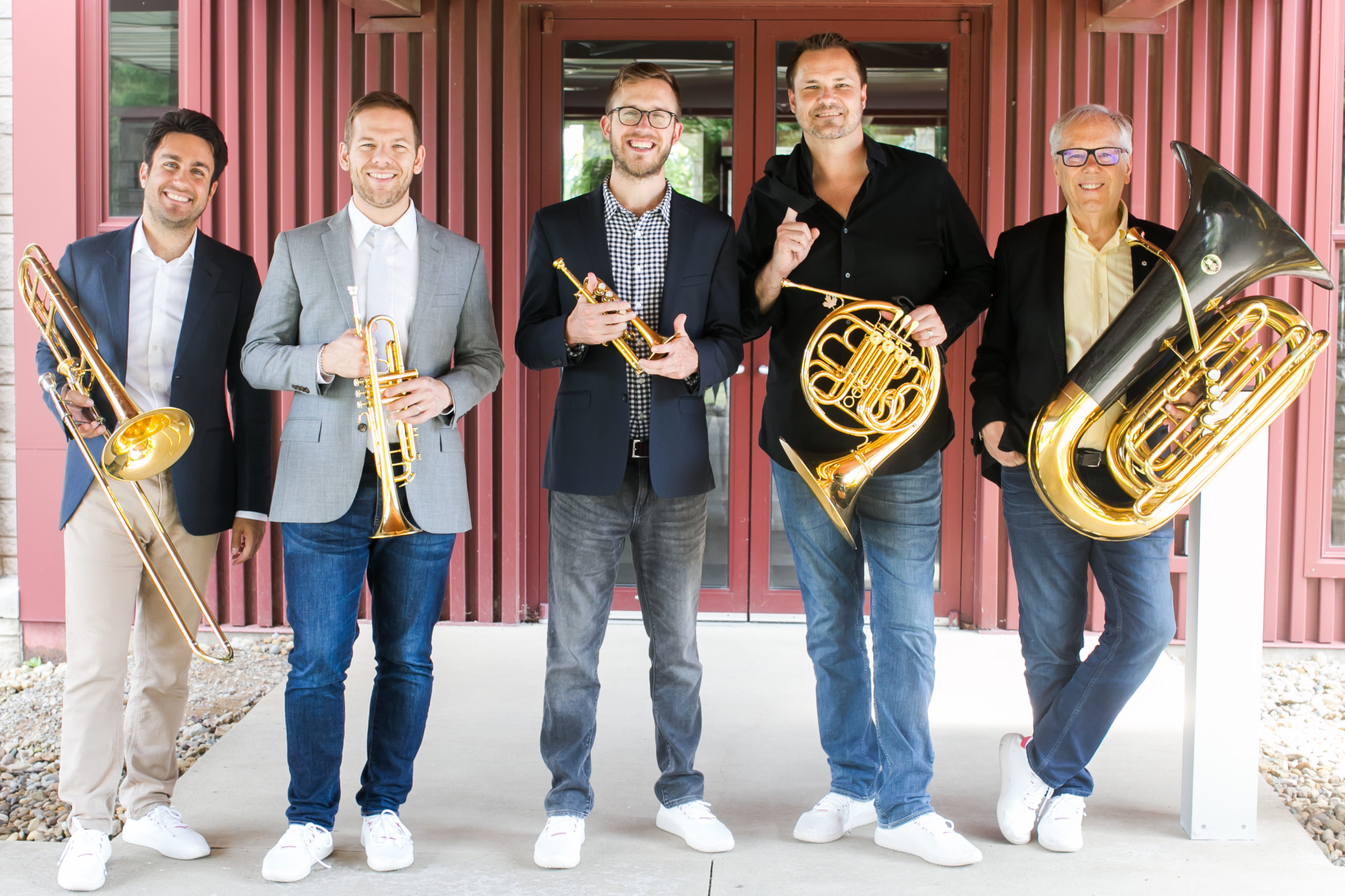 “If you said the Canadian Brass represented the “gold standard” among brass quintets, you’d be right on the mark. — NPR Music

“One need not be partial to brass, or even to classical music, to love Canadian Brass. … the group’s illuminating performance proved they know exactly what they’re doing. Bach wasn’t the only one who came off sounding brilliant.” — Cleveland.com