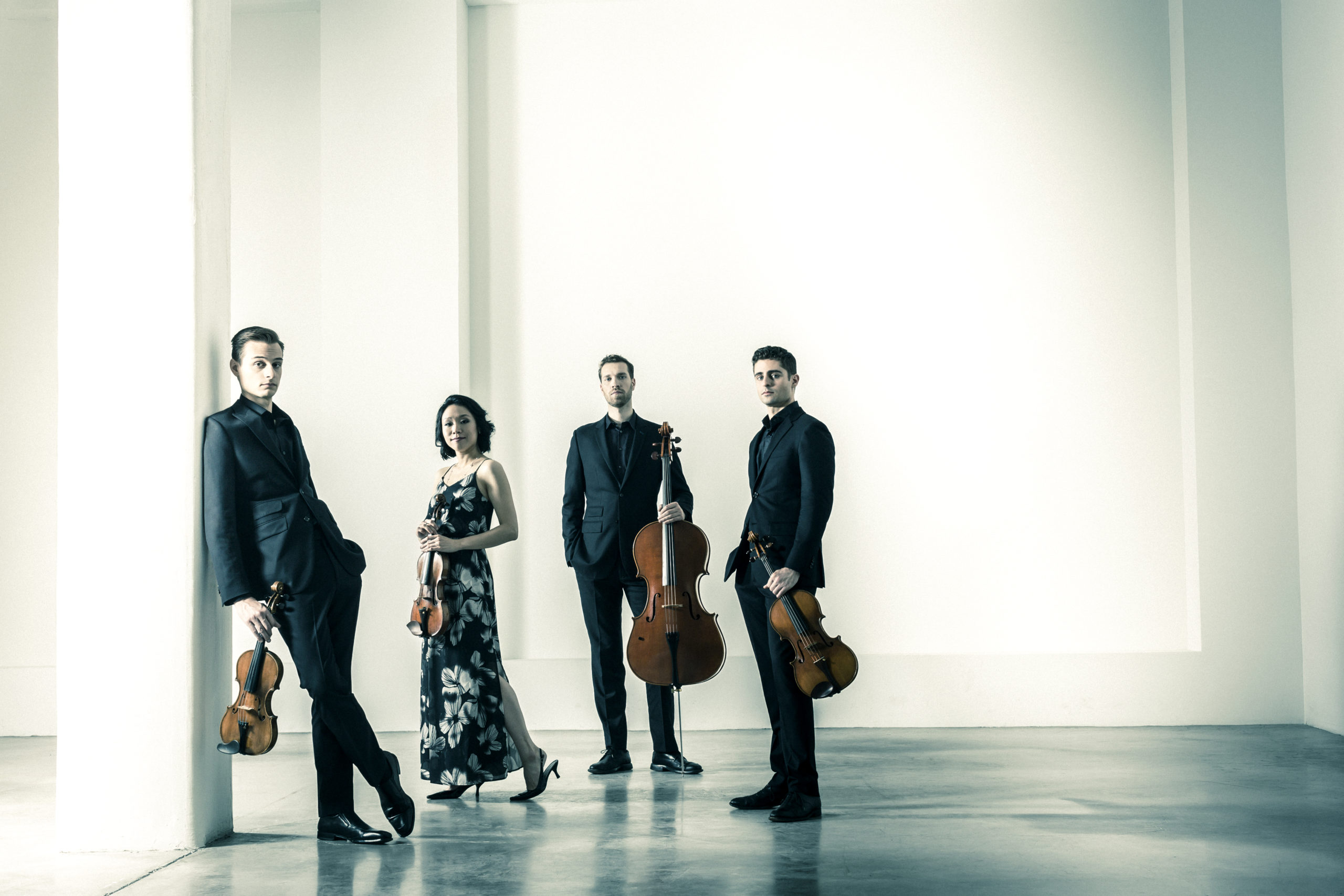 “Though free to think and act, we are held together, like the stars in the firmament, with ties inseparable. These ties cannot be seen, but we can feel them.” – Nikola Tesla

These words are the inspiration behind the Tesla Quartet’s vision. For the quartet, music is the conduit for this incredible, binding force, these “ties inseparable.” Through performance, teaching, and outreach, the Tesla Quartet strives to tap into this palpable feeling and create meaningful connections with their audiences.

Praised for their “superb capacity to find the inner heart of everything they play, regardless of era, style, or technical demand” (The International Review of Music), the Tesla Quartet brings refinement and prowess to both new and established repertoire. Dubbed “technically superb” by The Strad, the Tesla Quartet has won top prizes in numerous international competitions, most recently taking Second Prize as well as the Haydn Prize and Canadian Commission Prize at the 12th Banff International String Quartet Competition. In 2018, the Tesla Quartet released its debut album of Haydn, Ravel, and Stravinsky quartets on the Orchid Classics label to critical acclaim. BBC Music Magazine awarded the disc a double 5-star rating and featured it as the “Chamber Choice” for the month of December. Gramophone praised the quartet for its “tautness of focus and refinement of detail.” Their second disc on the Orchid Classics label, Joy & Desolation, a collaboration with clarinetist Alexander Fiterstein featuring quintets by Mozart, Finzi, John Corigliano, and Carolina Heredia, was released in October 2019.

Now entering its second decade, the quartet performs regularly across North America and Europe, with recent highlights including their debut at New York’s Lincoln Center, a return to London’s Wigmore Hall, and performances at Stanford University’s Bing Concert Hall as winners of the prestigious John Lad Prize. Other recent international engagements include tours of Brazil, China, and South Korea. Notable festival appearances include the Banff Centre International String Quartet Festival; the Joseph Haydn String Quartet Festival at the Esterházy Palace in Fertőd, Hungary; the Mecklenburg-Vorpommern Festival in Germany; and the Festival Sesc de Música de Câmara in São Paulo, Brazil. Having served as the Marjorie Young Bell String Quartet-in-Residence at Mount Allison University in New Brunswick, Canada from 2016-2017, the Tesla Quartet also recently completed a four-year community residency in Hickory, North Carolina that included performances and workshops at local colleges, universities, and in the public school system, as well as a dedicated chamber music series.

The Tesla Quartet was formed at The Juilliard School in 2008 and quickly established itself as one of the most promising young ensembles in New York, winning Second Prize at the J.C. Arriaga Chamber Music Competition only a few months after its inception. From 2009 to 2012, the quartet held a fellowship as the Graduate String Quartet-in-Residence at the University of Colorado-Boulder, where they studied with the world-renowned Takács Quartet. They have also held fellowships at the Aspen Music Festival’s Center for Advanced Quartet Studies, the Britten-Pears Young Artist Program, and the Norfolk Chamber Music Festival. 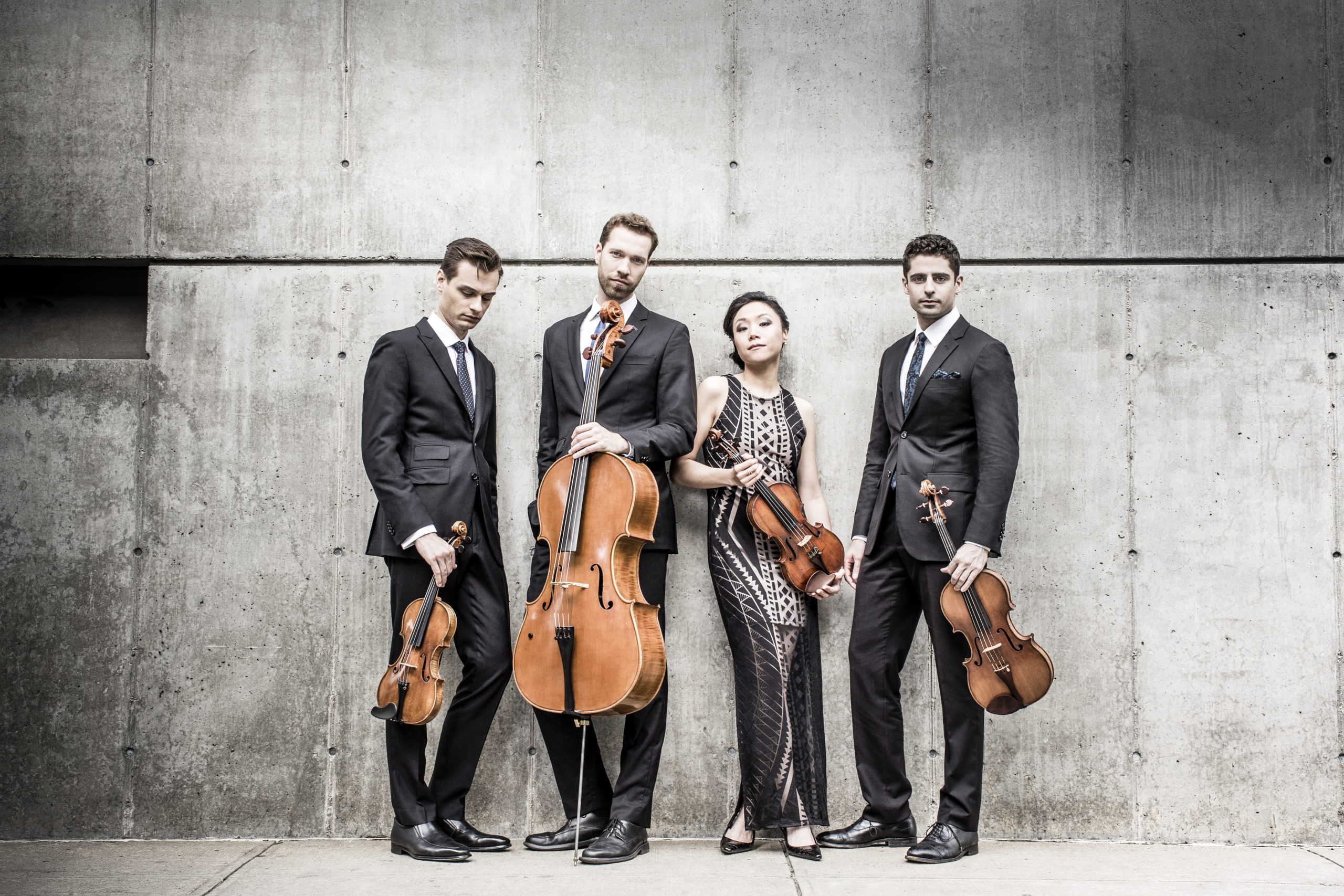 “Impassioned interpretation was the rule throughout. …There were many refined moments of sweet repose too, particularly in the coda that were given duly sensitive treatment by the ensemble, an important contrast that helped to display the many sides of Brahms’s musical personality . . . [The ensemble] handled it all with an astute combination of power and grace, shifting gears seamlessly throughout the manifold textures.” —Stephen Bonfield, Calgary Herald

“The Tesla Quartet (US) followed with Debussy’s String Quartet, the fleeting atmospheres of which have defeated some of the world’s finest. This was a subtly coloured performance that balanced confidently between intimacy and extraversion. A real sense of four players listening to each other did not obstruct a natural rapport with the audience.” —The London Evening Standard

“The Tesla players…offered an impressive program of music reaching across centuries of compositional creativity. And they did so with a superb capacity to find the inner heart of everything they played, regardless of era, style or technical demand.” —Don Heckman, The International Review of Music

“There was poise, mystery and elegance in the first movement, and playing in the second that was at once strong and delicate, the staccato perfectly judged to both speak and bite, the fortissimo outbursts raw and vehement. …The Tesla was technically superb in Debussy’s Quartet, its performance full of urgency, colour and subtle dynamics. This was a masterclass in quartet technique, with great momentum in the last movement.” —The Strad

“Their commitment to excellence has paid off for them in a big way in a short time. …When a chamber group can make you feel like you are listening to a full orchestra, you have to admit there’s some real magic taking place.” —Midwest Record