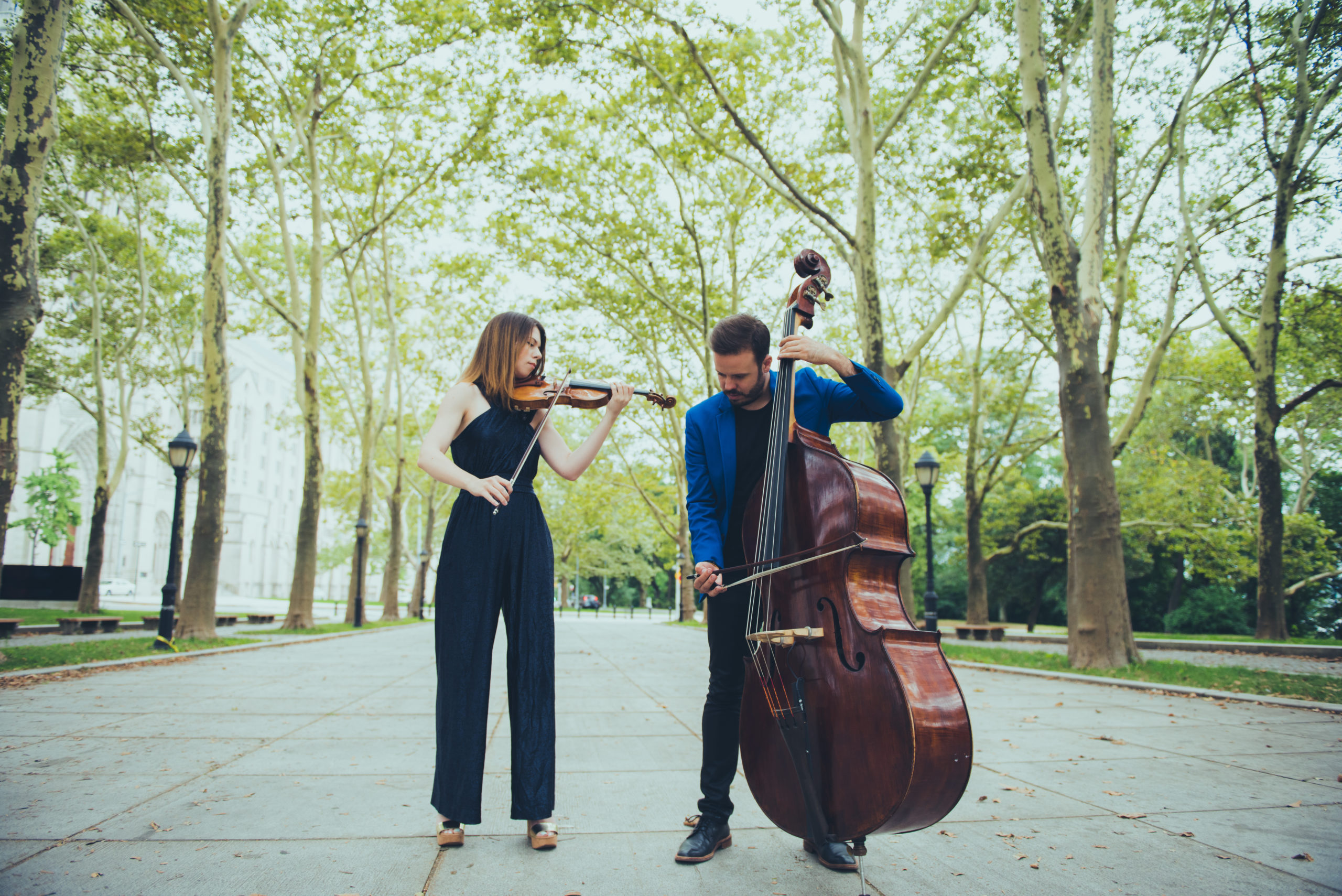 Award-winning violinist Tessa Lark and virtuoso composer/bassist Michael Thurber have come together to create a duo unlike any other. By fusing their classical and American music influences, they have created a wholly original sound, which they bring to audiences around the country in a charismatic live show. Highlights of their 2019-20 season include a headlining debut performance at Lincoln Center’s Mostly Mozart Festival; a debut at Philadelphia’s Kimmel Center in collaboration with legendary flautist Marina Piccinini; the guest-hosting of a live broadcast of NPR’s From the Top; and engagements with Palm Arts (Telluride, CO), Musical Masterworks (Old Lyme, CT), Joye in Aiken (Aiken, SC), the Fine Arts Society of Southeastern Kentucky (Corbin, KY), and Coastal Concerts (Lewes, DE).

*originals by Lark and Thurber

ABOUT TESSA LARK AND
MICHAEL THURBER

Lark and Thurber met years ago as alumni of From the Top. They began developing their duo collaboration in 2016 after a one-off performance at an event for WQXR in New York City. The two quickly realized how much they had in common musically.

“This duo is a place for us to explore our varied musical influences,” says Lark. “I grew up in Kentucky playing bluegrass long before I started my career as a classical musician, so I’ve always longed for an outlet to integrate my American music roots into my performances.” Thurber adds, “Our diverse musical appetite is what has always drawn Tessa and me together. The fiddle and bass are both such versatile instruments and have played vital roles in so many different musical traditions around the world. It feels very natural to explore the full range of our musical heritage and not be bound by genre.”

Outside of their duo, Lark and Thurber have enjoyed successful careers of their own. In the classical music world, Tessa has earned many of the top honors available to young artists, including a GRAMMY nomination for her 2019 recording of Michael Torke’s Sky: Concerto for Violin with the Albany (NY) Symphony Orchestra; a 2018 Borletti-Buitoni Trust Fellowship; a 2016 Avery Fisher Career Grant; Silver Medal in the 2014 International Violin Competition of Indianapolis; and a First-Place finish in the 2012 Naumburg International Violin Competition. Michael has a reputation as one of the most versatile musical talents of his generation. Whether he’s playing bass on The Late Show with Stephen Colbert, composing music for the Royal Shakespeare Company, co-founding the smash YouTube channel CDZA, or hosting his Thurber Theater variety show at Joe’s Pub in New York City, Thurber’s musical voice defies genre and category.

In their respective careers thus far, Tessa and Michael have had the privilege of collaborating with some of the world’s leading musicians in a wide variety of genres, among them Mitsuko Uchida, Edgar Meyer, Itzhak Perlman, and Mark O’Connor (Tessa), and Yo-Yo Ma, James Taylor, Vulfpeck, Jon Batiste, and CeeLo Green (Michael).

The duo’s debut album, Invention, which intersperses arrangements of J.S. Bach’s Two-Part Inventions with original compositions by Lark, Thurber, and Eddie Barbash, was released on August 8, 2019. 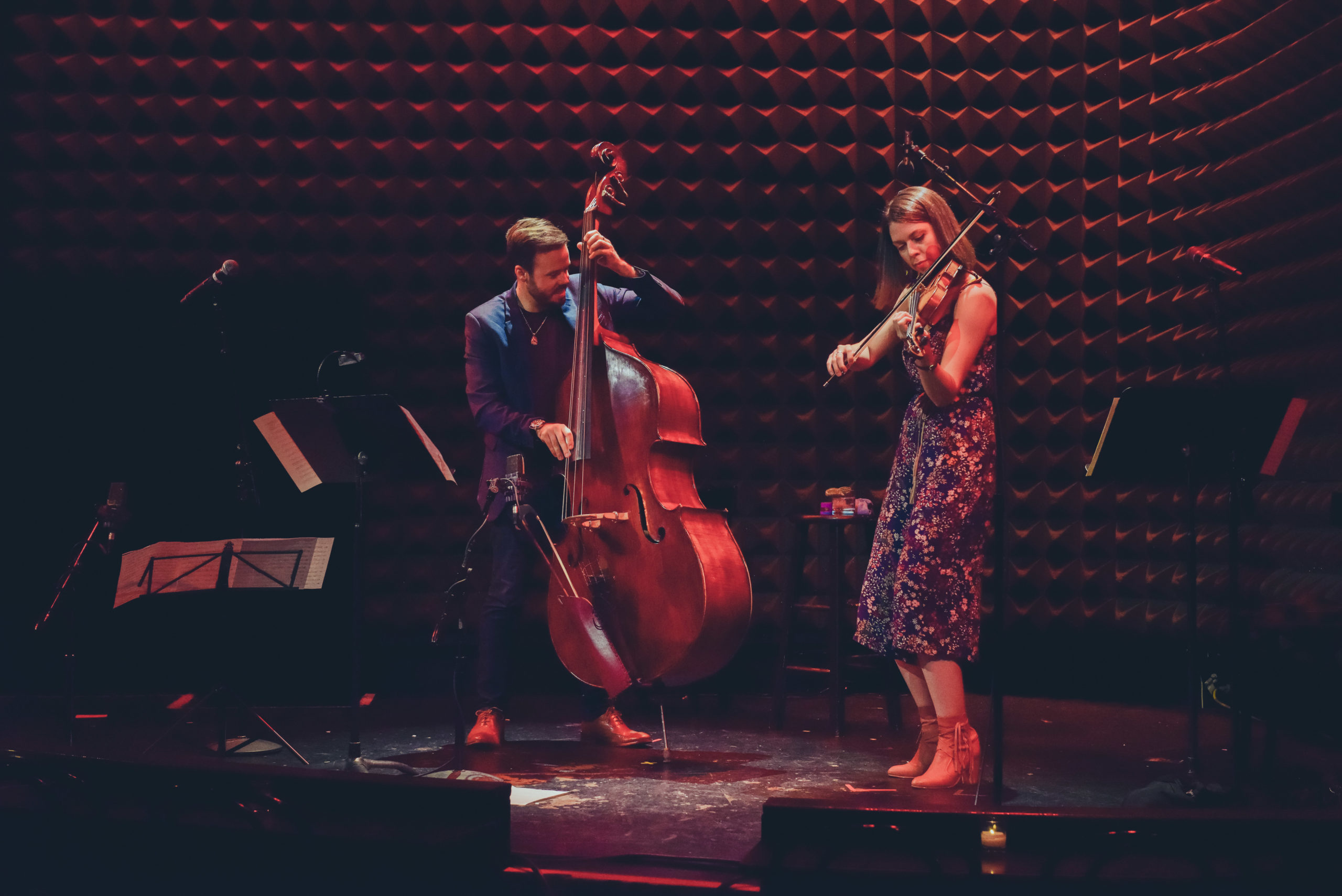 “With exhilarating teamwork, humor and educational instincts, the two musicians charmed an eager crowd in their first appearance at The Mostly Mozart Festival.” —Strad Magazine