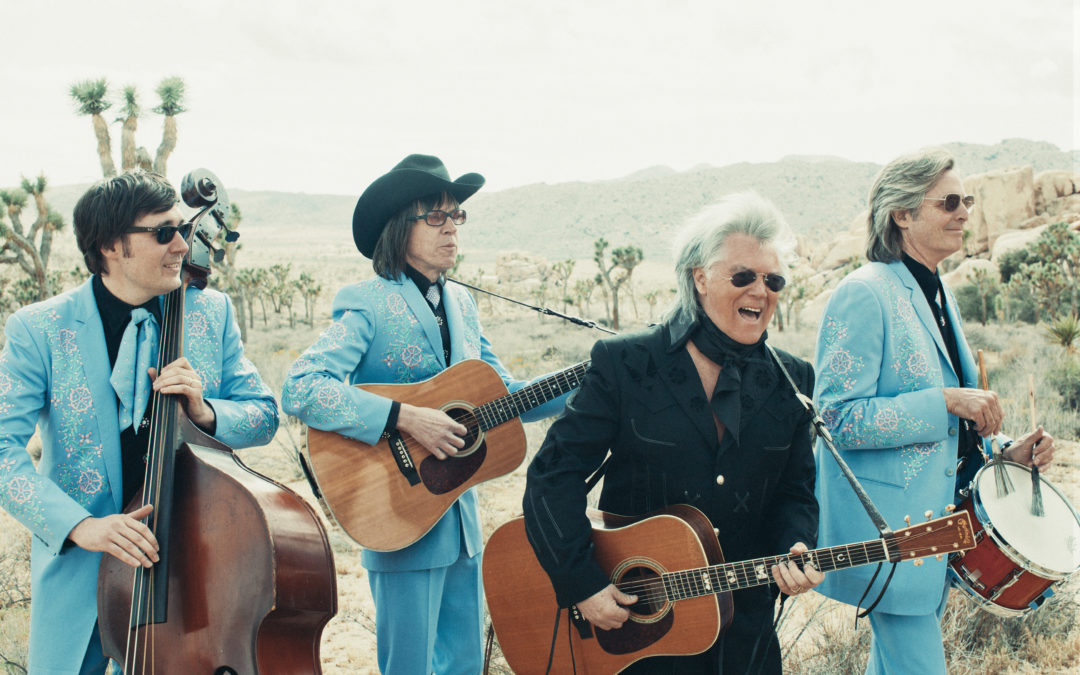 BOONE, NC— Appalachian State University’s annual summer arts event, An Appalachian Summer Festival (AASF), proudly celebrates its 38th season July 1-30, 2022. This monthlong whirlwind features the best in music, dance, theatre, visual arts, and film programming and is one of the nation’s leading regional arts festivals, attracting an audience of 28,000, including thousands of visitors to the High Country each summer. Tickets go on sale Monday, May 2 at 10am. To purchase tickets or for more information, including videos and images, visit www.appsummer.org or call the Schaefer Center for the Performing Arts box office at 828-262-4046.

With legends like George Jones, Johnny Cash and Merle Haggard all passed on, country music purists often echo the question Jones himself asked: “Who’s going to fill their shoes?” The answer, in part, is Marty Stuart. The Grammy-winning singer, songwriter and musician is living, breathing country-music history. He’s played alongside the masters, from Cash to Lester Flatt, and continues to record and release keenly relevant music that honors country’s rich legacy while advancing it into the future.

Renée Elise Goldsberry (July 16, Schaefer Center, 8pm)
Stage and screen star Renée Elise Goldsberry is perhaps best known for her role as Angelica Schuyler in the Broadway musical phenomenon Hamilton, which earned her Tony, Grammy, Drama Desk, and Lucille Lortel awards. In July 2021, she was nominated for an Emmy Award for the Disney+ film adaptation. Renée also starred on Broadway in The Color Purple, The Lion King (Nala), and RENT (Mimi), was a regular in the popular soap opera One Life to Live (she won two Daytime Emmys), and is currently on Tina Fey’s Peacock network hit musical comedy, Girls5eva. Renée’s set will cover music from Hamilton, RENT, The Lion King, The Color Purple, other Broadway numbers, and a tribute to the great Aretha Franklin.

Postmodern Jukebox: The Grand Reopening Tour (July 23, Schaefer Center, 8pm)
Pop-jazz collective Postmodern Jukebox — the time-twisting musical collective known for putting “pop music in a time machine” — returns to Boone with The Grand Reopening Tour, which promises audiences “the most sensational ’20s party this side of The Great Gatsby.” Performing some of modern music’s biggest hits in the classic styles of bygone eras, the tour features an ensemble of multi-talented singers and musicians who bring creator Scott Bradlee’s generation-spanning arrangements alive night after night. The core ensemble is often joined by surprise guests to make each concert unique and unpredictable – making for one of the most thrilling live music experiences of this and any other time period.

Boz Scaggs: Out of the Blues Tour 2022 (July 27, Schaefer Center, 8pm)
For five decades, Boz Scaggs has mined a personalized mix of rock, blues and R&B influences, along with a signature style of ballads on such influential ’70s albums as Moments, Boz Scaggs & Band, My Time, Slow Dancer, and 1976’s Silk Degrees, the latter of which spawned three Top 40 hit singles: “It’s Over,” “Lido Shuffle,” and the Grammy-winning “Lowdown.” Silk Degrees was followed by the albums Down Two then Left and Middle Man, introducing such hit singles as “Breakdown Dead Ahead,” “Jo Jo,” and “Look What You’ve Done to Me.” Scaggs’ appearance marks his first return to the festival since 2013.

Maeve Gilchrist featuring Aizuri Quartet & Kyle Sanna: The Harpweaver (July 5, Rosen Concert Hall, 7pm)
Described as “a phenomenal harp player who can make her instrument ring with unparalleled purity,” Maeve Gilchrist (harpist, singer, composer, and producer) has taken the Celtic (lever) harp to new levels of performance and visibility. The Aizuri Quartet infuses all of their music-making with infectious energy, joy and warmth. Gilchrist and the quartet, with guitarist Kyle Sanna, perform Gilchrist’s The Harpweaver, a piece that illuminates her roots as a traditional folk musician through the prism of luscious string parts, electronic manipulation, and an archived recitation of poet Edna St Vincent Millay’s “The Ballad of the Harpweaver.”

Imani Winds (July 19, Rosen Concert Hall, 7pm)
The twice Grammy-nominated Imani Winds has led both a revolution and the evolution of the wind quintet through their dynamic playing, adventurous programming, imaginative collaborations and outreach endeavors. The ensemble’s playlist embraces traditional chamber music repertoire, but as a 21st century group, Imani Winds is committed to expanding the wind quintet repertoire by commissioning music from new voices that reflect historical events and the times in which we currently live. The evening’s program is titled “The Beauty of Strife,” illuminating how world events yield significant art.

Rosen-Schaffel Competition for Young and Emerging Artists (July 24, Rosen Concert Hall, 2pm)
In partnership with the Hayes School of Music, the festival presents the 11th annual Rosen-Schaffel Competition for Young & Emerging Artists, known for the pivotal role it has played in launching the careers of some of our region’s most promising young artists. During this final live round, three distinguished conductors will choose a First, Second, and Third Place winner. The competition’s audience will also select an Audience Choice Award winner. In addition to a cash prize, the First Place winner will be awarded the opportunity to perform during the 2023 season of An Appalachian Summer Festival.

Rolston String Quartet (July 26, Rosen Concert Hall, 7pm)
With their debut album Souvenirs, an all-Tchaikovsky release that was named Recording of the Year by BBC Music Magazine, the Rolston String Quartet continues to receive acclaim and recognition for their musical excellence. The quartet, which will perform a program of Haydn, Thomas and Beethoven, was awarded First Prize at the 12th Banff International String Quartet Competition, and was the recipient in 2018 of Chamber Music America’s prestigious Cleveland Quartet Award.

MOMIX: Alice (July 30, Schaefer Center, 7pm)
MOMIX’s internationally acclaimed dancer-illusionists conjure the magical world of the White Rabbit, Mad Hatter, and the Queen of Hearts in this stunning reimagining of Lewis Carroll’s novel. Journey down the rabbit hole with MOMIX and the visionary choreography of Artistic Director Moses Pendleton. Filled with visual splendor and startling creative movement, Alice reveals that nothing in MOMIX’s world is as it seems!

Broadway’s Next Hit Musical (July 7, Valborg Theatre, 8pm)
Whose Line Is It Anyway? meets The Tony Awards. Every song is fresh. Every scene is new. Every night is different. It is all improvised and it’s all funny. Broadway’s Next Hit Musical is the only unscripted theatrical awards show. Audience members write down made-up song titles and master improvisers gather the suggestions and present them as “nominated songs” for the coveted PHONY Award, creating spontaneous scenes and songs filled with great dancing, catchy melodies, and tons of laughter. The audience votes for their favorite song and watches as the cast turns that song into a full-blown improvised musical — complete with memorable characters, witty dialogue, and plot twists galore.

Known for his distinguished career with the School of Filmmaking at UNC’s School of the Arts, as well as his role as a nominator for the Academy Awards, the festival’s 2022 film curator, Dale Pollock, continues the festival’s reputation for presenting memorable and celebrated films from around the world. This season’s Weicholz Global Film Series (Schaefer Center, 7pm) features films that are told from a child’s point of view:
Playground (Un monde) (July 8)
Belfast (July 13)
When Pomegranates Howl (July 20)
On the Water (Vee peal) (July 28)

Summer Exhibition Celebration (July 1, Turchin Center for the Visual Arts, 5-9pm)
Celebrate summer at the Turchin Center for the Visual Arts and engage, discover and connect through the arts! The Summer Exhibition Celebration is an opportunity for art lovers to meet the artists, enjoy live music and refreshments, and spend time with fellow arts patrons while exploring one of the most exciting venues in town: a collection of six galleries filled with a diverse mix of contemporary art by local, regional, and international artists.

36th Annual Rosen Outdoor Sculpture Walk (July 9, Schaefer Center, 10am)
To celebrate the 36th anniversary of this annual national juried competition, join competition juror Elizabeth Brim for an educational outdoor tour of the 10 sculptures from this year’s competition. The tour concludes at the Schaefer Center with an awards reception. Made possible by the continued support and generosity of the Rosen Family.

Tickets for An Appalachian Summer Festival:
With ticket prices ranging from $20-$50, as well as several free events, the festival offers unique opportunities for residents and visitors to create arts experiences suited to their individual artistic tastes and budgets. To purchase tickets, call or visit the Schaefer Center box office at 800-841-2787 or 828-262-4046. Tickets can also be purchased online at AppSummer.org.

Ticket Packages
Value packages are available to purchase for the Popular Music Series* and Broyhill Chamber Series* (*some exclusions apply). Special Artist VIP Packages are being offered for Marty Stuart and His Fabulous Superlatives and Boz Scaggs: Out of the Blues Tour 2022. Visit AppSummer.org for complete details.

About An Appalachian Summer Festival:
Presented by Appalachian State University’s Office of Arts & Cultural Programs, this annual celebration of the performing and visual arts is held every July in venues across the university campus, and features an eclectic, diverse mix of music, dance, theatre, visual arts and film programming. An Appalachian Summer Festival began in 1984 as a chamber music series, and retains strong roots in classical music, combined with a variety of other programming geared to almost every artistic taste and preference. With an audience of 28,000, the festival has been named one of the “Top Twenty Events in the Southeast” by the Southeast Tourism Society in recent years.