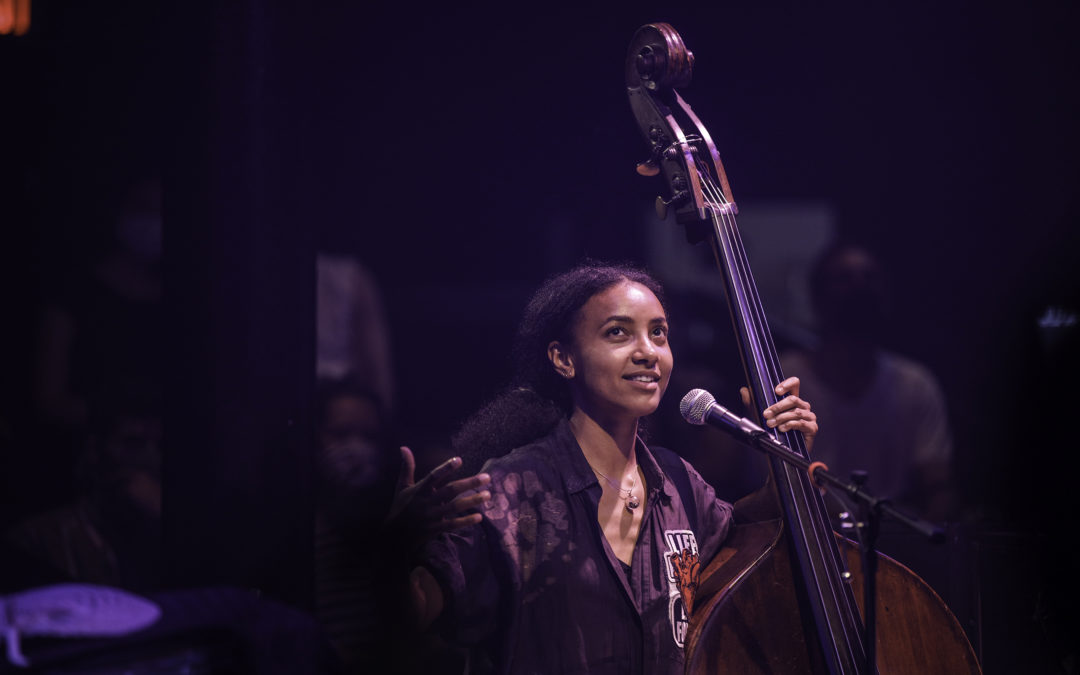 BOONE — Esperanza Spalding is an acclaimed musician who tries to incorporate the world around her, and the experiences that surround all of us on this small planet, into her music.

Known as a jazz artist — an important genre that explores the possibility of music in some of its highest forms yet amazingly ranks the lowest when it comes to popularity these days — Spalding began as a classical musician in her home of Portland, Oregon.

Motivated by seeing the great cellist Yo Yo Ma perform and converse on the infamous children’s TV show “Mister Roger’s Neighborhood” as a kid, Spalding knew what her path would be at an early age. As a teenager, her obvious talent and growing abilities would lead to scholarships at schools such as The Northwest Academy and the Berklee College of Music located across the country in Boston. Mentored and encouraged by jazz legends and Berklee instructors Pat Metheny and Gary Burton, Spalding also cultivated her impressive multi-octave singing voice while expanding her bass playing style.

When Spalding graduated from Berklee in 2005, she was asked to be an instructor at the school. By 2011, with three albums under belt, she won a Grammy Award for Best New Artist, an honor usually reserved for pop artists.

As time went by, Spalding’s artistic curve showed no signs of veering into stereotypical repetitiveness. Even now, boxing her talent into the confines of the jazz genre does not tell the full story. She continues to combine other kinds of music into her compositions, singing and playing as well as the sounds of the earth mixed with a spiritual essence that keeps her unique grooves fresh and flowing.

Spalding’s latest album is called the ‘Songwrights Apothecary Lab,’ which is officially described as, “Half songwrighting workshop, and half guided-research practice, the Songwrights’ Apothecary Lab seeks to develop a structure for the collaborative development of new compositions designed to offer enhanced salutary benefit to listeners.”

Recorded in three locations and divided into 13 compositions each known as a “Formwela” with the added numbers 1 through 13 attached to the constant title; each song on the album is accompanied by a highly-creative video, which you can view on Youtube here — tinyurl.com/SpaldingBoone.

Esperanza Spalding will perform at the Schaefer Center for the Performing Arts this Saturday, July 9, as a part of Appalachian State University’s Summer Series. The concert begins at 8 p.m. and tickets are $45 for adults and $25 for students. The Schaefer Center is located at 733 Rivers Street in Boone.

Joining Spalding onstage will be Matthew Stevens on guitar, Morgan Guerin on sax, keyboards and bass, and Eric Doob on drums along with Sasha Ishmel-Muhammad on vocals and Vuyolwethu Sotashe on vocals.

Along with the musicians, Spalding has incorporated dance into her live show that will feature choreographer/dancer Antonia Brown along with dancers Kaylin Horgan, Christiana Hunte and Tashae Udo. All of the performers will be working with wardrobe designer Marion Talan De La Rosa, lighting designer Kate McGee and sound engineer Fernando Lodeiro.

The previously-mentioned idea of Spalding bringing the essence of her natural surroundings into her music is something that purposely appears on her new ““Songwrights Apothecary Lab”” project.

The first three cuts were composed and expounded upon while Spalding and fellow artists spent time in Wasco County, Oregon, which is west of Portland and south of the Yakama Indian Reservation. Spalding and collaborator Corey King combined to create music in Portland, Oregon, and for the final six cuts, she went east to Lower Manhattan and New York City where she combined her creative forces with those of Leonardo Genovese, Francisco Mela, Matthew Stevens, Aaron Burnett, Grant Jones, Nivi Ravi, Ganavya Doraiswamy, Britton Howard, Marisol Norris, Héloïse Darcq, Lower Manhattan Cultural Council and The Clemente Soto.

“I’m sure (outside natural influences) are always happening, whether or not we intend for them to, because the place that we are in informs the way that we play and what we hear and compose,” said Spalding. “When we were in each location of the “Songwrights Apothecary Lab”, we were very much incorporating the sensation of being in each locale into the song. It was one of the guiding principles of the Apothecary quilt; that we really want the place, the people in the place and the atmosphere of the place to inform the music and to be legible through the music. We clarify where each piece was created (in the liner notes found at songwrightsapothecarylab.com) partially to augment the connection with the place and partially hoping that people can tune into the atmosphere of that place and hear how that is resonating in the music that we created there.”

At this point, Spalding’s recordings all seem to be what some refer to as “concept albums,” in that the musical pieces enclosed are cohesive, connected, and more than just a collection of individual, stand-alone songs grouped together to form an album.

“I’ve never used the phrase ‘concept album’ before, but I guess to me every album is a concept album because it has a title and it does have an intention, even if the album is based on snippets that we wrote over the last however-long period of time,” said Spalding. “In my case, and in our case, these albums are a record of what we are interested in at the time. But, you have to organize the information in some kind of way, so the shape they take is of an album. Albums, however, are a very arbitrary format, with 12 songs on it. It is just what we have at the moment. If there was another format available to offer a portrait of what we are working on, I would use it. I wish there was another format that was funded or supported or distributed the way that albums are, but there isn’t one yet. So, albums are the format that I have to use. It will be cool when another, maybe more-multi-sensory format becomes available.”

Spalding, with her appreciation of nature always in the mix, is thrilled when told that these western North Carolina Mountains are the highest east of the Rocky Mountains. While she has been to Asheville before, Spalding has never been to Boone. Thankfully, Spalding will get to spend more than one day here in the High Country as along with her concert at the Schaefer Center on Saturday, she will also be spending some time with the students in the Hayes School of Music at our own Appalachian State University. Whether her spare time enables a visit to Linville Gorge or the top of Elk Knob Mountain is unknown.

“Oh cool. I didn’t know that,” said Spalding, when told of the uniqueness of these Blue Ridge Mountains. “I’ve been to Asheville, of course, but I haven’t been to that region before. I love the mountains. I love that I am coming to those mountains. And, this concert in Boone will be the first performance for this particular exploratory project, so that is really special. We are also actually going to be there for a few days with the university, so I am excited about it.”